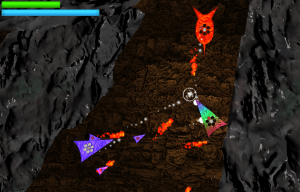 Our first game “Endless Dream” is the continuance of a student project called Hypersoul which was developed before our team was founded.  This project was mainly used to learn the basics of unity and like many other projects mandatory at our university. Hypersoul took one month to develop with a team of 3 programmers. Assets used for this game were either free assets or self made by programmers because no artist was in the team. However the gameplay was similar to our current project Endless Dream where the objective is to steer a ship through a labyrinth filled with obstacles, enemies and traps. The player can find gemstones which give the player abilities when equipped. In Endless Dream,  the equipment was reduced to four slots. The setting was supposed to be a mystical cave like world. However creating good visual content without professional artists and limited time was nearly impossible. 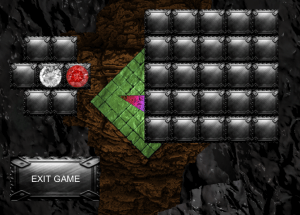 As a result, many aspects of Hypersoul didn’t look right but also technical stuff was not implemented correct. Controls were slow and gave the player the feeling of steering a heavy loaded truck. The user interface was a very simple drag and drop system. Seven slots on the left represent the equipment and the right ones the inventory. A rule was that it it only to remove items from the equipment when resting at a save point. A combination system did not exist in this prototype, instead it was planned that every gemstone should have unique abilities. 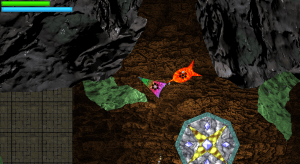 Hypersoul consists of one level which can be played. This level is filled with enemies and contains one boss. Like in Endless Dream, the enemies also used the same slot system which simplified the enemy design. The visual appearance of the ships should resemble jewelry like gold or silver filled with gemstones. However due to the inexperience in shader coding, the result didn’t look right. After all the AI was very basic but was enough for this kind of game.  Back then, the player had the ability to auto target the enemy by pressing the shift key. When activated, the ship turned towards the enemy which removed the need of aiming. During tests, players never used this feature and aimed manually. Also story elements were not existent at all but was not required at our university.

Although many mistakes were made, a lot of knowledge about game development was gained.  It was the first game developed with Unity3D and included technical requirements like Save System, Databases, AI, Physics, Camera and Audio. Hypersoul can be downloaded and is free to play for anyone interested.